This game we played at Challenge Games here in Lubbock.
These are the only pictures we remembered to take.
I'm going to try to explain what is deployed, and why I did it the way I did and how I could have done better.
I cannot exactly remember now what was in each of Jacks transports etc. but I will try.
My Deployment: 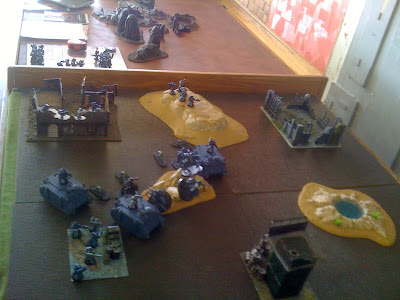 Starting from the left in the picture I've got 5 long fangs with 3 missiles and a lascannon, behind them 7 grey hunters and a wolf guard. Back in the ruins another long fang squad with 3 missiles and lascannon.
To the right of the front long fangs is 8 grey hunters, a wolf guard, and the rune priest.
Then both HQ's on wolves, the lord on the left and the battle leader on the right, with the regular cavalry between then on the rocks.
We have another group of long fangs, 4 missiles, and another rhino with 8 grey hunters and a wolf guard.
Alright, here's what I feel that I screwed up. The two back squads of long fangs were very poorly placed, they should have been forward if they could, 48in isn't as long when you are going long ways in spear head.
I could have gotten them forward a bit more, though you can see the big tower in the middle that blocked up LOS pretty well.
I should have kept those rhinos a bit farther back, though I think I deployed defensively fairly well. If I was going second I would have kept the rhinos basically where they are, but gotten the long fangs up farther.
But for getting first turn, I still should have had the rhinos farther back and the long fangs up more for later turns, they ran out of targets in range fairly fast.
Here is Jack's deployment: Alright some explanation, Jack is working on getting some Rhinos, the white papers are vehicles. The black circle is an ironclad. Starting on the left again, a razorback with lascannons, and squad inside, with a  Multi Melta speeder behind it. Next a rhino in the back with a missile launcher in it.
In the palm trees in the back is the combat squad from the razorback with a missile launcher. Behind them is the master of the forge on a bike.
Next the two rifleman dreads, and another rhino with a few marines in it next to the iron clad up front.
He also has 3 MM/Hf dreads in drop pods.
I'll get him to come comment on why and how he deployed.
Posted by Bryce963 at 2:03 PM