This is a 28mm WWII platoon level skirmish game. You have a few command models and two to five squads that make up your platoon. In addition to this core you can add a selection of specialist troops, along with artillery, anti tank guns, transports and a tank.

The game itself is a rather simple d6 based wargame. But, there are a lot of innovative components attached to a simple, quick, and functional base.

The most fundamental and innovative aspect of the game is the use of order dice. These dice are placed in a bag or some other opaque container to determine the order that units are activated in. A die is drawn and that player activates a unit. There are 6 actions that can be taken. The die is then placed next to the unit with the action taken face up.

1 Fire shoots with no penalty but without any movement.
2 Advance has you to move and fire with a -1 penalty.
3 Run moves a unit at double speed without firing.
4 Ambush the unit does not move but gets to fire out of turn.
5 Rally allows a unit to remove pin markers instead of moving or shooting.
6 Down this makes a unit harder to hit but gives up shooting and movement.

So this is the core of the game, you pull a die, that player activates a unit, then repeat until there are no dice left in the bag.


Shooting
Now on to shooting, the meat and potatoes of any non ancient war game. All units hit on a 3+. Simple enough. However there are many factors that affect the die role and take into account a whole host of conditions. Shooting at over half range, -1, shooting by Inexperienced -1, target in light cover(woods and brush, etc.) -1, behind a wall or other hard cover -2, shooting while moving with an Advance order -1, shooting at a unit that has taken a Down order -1.

As you can see this is a quick and easy way to resolve shooting. If modifiers increase the score needed to hit to 7+, then the unit cannot be hit.

Damage
Now damaging units is based on the training of the target unit, much like it Flames of War. An Inexperienced soldier is killed on a 3+, a Regular soldier on a 4+, and a Veteran soldier on a 5+.
Fighting against vehicles is the same, but needs a high number. Soft skinned vehicles such as a jeep are damaged on a 6+, armored vehicles go up from there.
So only heavy weapons with a + to Penetration can damage an armored vehicle. This + to damage also applies to non vehicles, so a .50 cal machine gun gets a +1 to damage infantry as well for example.

Pinning
The Pinning mechanic is the other innovative and interesting part of Bolt Action. When a unit is hit by shooting they get a pin marker, one per unit that shot. Each pin marker forces a -1 to the Morale score of a unit. When a unit has pin markers on them, they must take an order test to successfully carry out what they are ordered to do. An Inexperienced unit has Morale of 8, Regular 9, and Veteran 10. An order test is essentially the same as morale in warhammer, roll under or equal on 2d6. To execute an order, the unit must pass a Morale test, but a pin marker imposes a -1 on the test. Additionally each pin marker imposes a -1 to hit on a firing unit.

Assault
Units can charge into close combat with another unit by using a Run order. Each side rolls dice to kill(no rolls to hit) at one or more per soldier depending on weapons and special rules. The defender gets the chance to shoot, the attacker rolls to damage first, then the defender, and the loser is wiped out baring some special rules.

Conclusion
Here's some pictures of the stuff I have done so far. 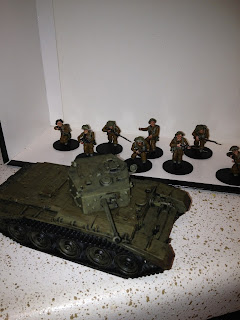 My first painted section and Cromwell. 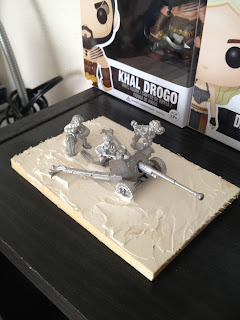 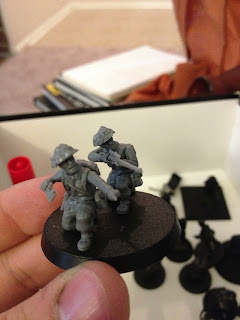 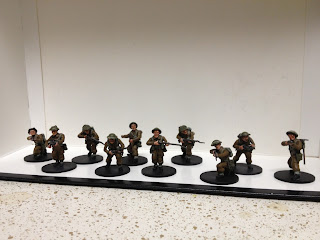 A somewhat better picture of my painted section. 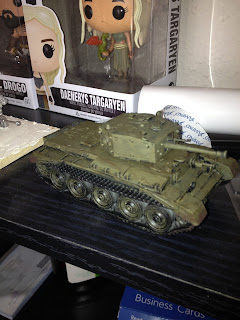 Closer picture of the Cromwell.

I have been getting to paint for about 15 min a night and my progress is finally worthy of a small little blog post.  The list as it is right now is a Vendetta (minus the las cannons) + 20 guard which will either end up being vets or part of a mob + 1 painted imperial fists marine. 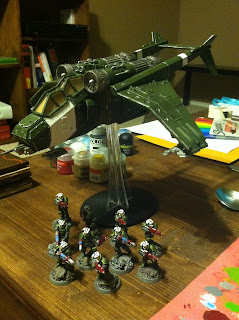 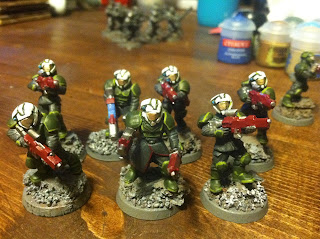 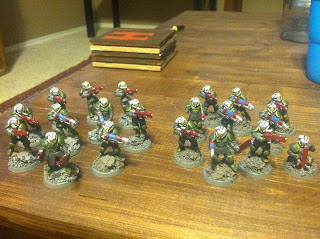 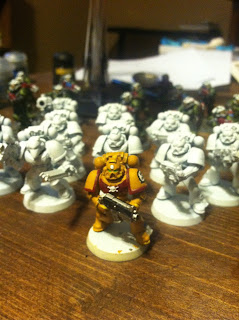 I hope you guys enjoy the progress update. I am sure Bryce will be along soon with an update with more substance. Also I would love to know if anyone else out there has tried out a guard/marine list. I have read some battle reports and they do about as well as anything else it seems. Thanks everyone, Jack!