Alright, Tuesday night Jack and I got to try out our team list. We played up at Challenge games here in Lubbock, against a good fellow named Mitchell. He brought guard and black templars, him against the two of us.

Oh gods the carnage. It was a total wipe out on our part. We got maybe 1 kill point and had I think 1 left at the end of the game. 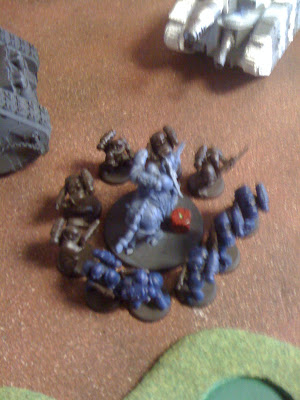 Here is our lists

This was a slaughter. Running my thunderwolves with lord first turn got them just into charge range of the terminators, they all died. Also during his first shooting phase the manticore took out two of the other thunder wolves, the powerfist/SS rider was the only model to survive the game.

Everything just went down hill from there. We tried to put up a defense, but those terminators were in our back lines and chasing the wolf lord off the table, he never ran fast enough to get away.

However, the lone powerfist cavalry model immobilized the land raider, allowing vets to kill it( our only kill point I think), he also killed both of the black templar troops choices on his own.