Well it looks like the first part of the battle report was our most popular post so far.
Here is the long awaited(I like to imagine) second part.

One more time with feeling.
Turn 4: 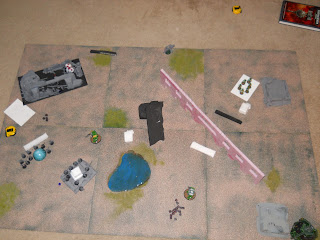 Marines
M The ironclad and drop dread lumber into position, finally getting close enough to affect the battle again. The rifleman runs away from the bloodbrides, they only have grenades.

S The drop dread sends a massive melta beam at the wracks on the objective, they go to ground, grateful for the 3+ cover save. The master of the forge fires his conversion beamer at the bloodbrides, hitting 2 wracks and 2 bloodbrides, only one wrack Felt No Pain. Both wyches and a wrack die. The rifleman fires on the wracks, hitting 4 and wounding two, neither cover nor FNP can save them, but both units pass morale. The Ironclad runs towards the wracks on the objective, a last chance for victory.

A No assaults this turn.

Dark Eldar
M The archon, bloodbrides, and wracks move into the ruins after the rifleman dread, looking to get at the soft space marine center. The wracks on the objective move to get them all into cover, insuring a draw for the time being.

S The warriors fire their blaster at the iron clad, of course it bounces off, not slowing defeat in the slightest. The wyches run towards the rifleman, readying their shardnets.

A The archon, bloodbrides, and wracks assault the rifleman to keep themselves safe from the bullshit conversion beamer on a bike. The wyches dance around the dreadnought, one planting a haywire grenade on his leg, mobilizing him, easy pickings for next turn. The dreadnought connects and wounds with his one remaining attack, but the bloodbride lithely dodges out of the way.


A word from your humble scribe; Ok, using wyches to hunt dreads is not ideal, but if you have no choice, shardnets and haywire grenades are amazing to have. They are now auto include on my units. 15 wyches with standard leader(agonizer and blast pistol), with grenades and 3 weapons, 2 nets and 1 hydra, are the same price as 10 with same options( only two nets), in a raider with flicker field. This had to be intentional, I like the modular nature that bestows.
Also, my archons are getting blasters from now on, and my close combat squads will pack blast pistols, there were so many times this battle I wished I had them, I think they are worth it. I don't know about blast pistols in warrior squads, I am planning on turning those into blasters for trueborn.

WE FORGOT TO TAKE A PICTURE
Marines:
M The Master of the forge moves back for more range, the two dreads move in for the kill on the objective holding wracks.
S The drop dread fires on the wracks, but going to ground saves their gnarly hide from becoming bacon. The ironclad has much better luck, hitting 6 with his heavy flamer, wounding 3, only one fails FNP. The Master of the Forge fires his Macross cannon at the warriors, having the maximum range band, as it said in my game notes "Str 10 ap 2, fuck. 3 are melted". They hold though.
A The ironclad charges into the wracks, they claw at him helplessly, he only smashes one though. But they hold. The Bloodbrides slap more grenades onto the rifleman, hitting with all 4, one penetrating the ammo hoppers of an autocannon destroying one weapon. One of the other three glances gets an immobilized result, taking out the other autocannon. He tries to hit back feebly, missing.
Dark Eldar:
M The warriors and leftover wracks try to get as close to the other objective with the ironclad and wracks on it as possible. The last act of a desperate man, not the first act of Henry the VIIIth.
S No shooting, nothing  is range, the warriors and wracks run, with 3 and 1 inch respectively, they won't be participating.
A The bloodbrides blow up the rifleman, the explosion wounds three of them, they fail both saves and die. The ironclad kills another wrack, and they run, though not far and still contest the objective.
Roll for the game ending comes up a 1.
Jack wins 1-0.
Alright, I'm going to put up my thoughts on this defeat. I'll let Jack know I finally finished this and see if he will do an after action report as well.
I am now really glad that my other raiders have come in the mail. The anti tank and mobility is key. A wall of AV 12 and 13, is pretty hard without that str 8 to help out. But even then, when faced with troops my infantry wrecked house, as they are supposed to. The wyches seem able to handle almost anything except getting shot at without a pain token. They are a great unit and I want to keep using some of them, though I am planning on going warrior heavy at the moment. I like the versatility they bring with differing strengths and ranges among their weapons. Also I can make trueborn with them, I want to try out a squad or two of those.
For this game my unit of the match would be the wracks, they are able to take a lot of heat(unless it's from a flamer), when in cover.
I have ordered another 30 warriors, 21 hellions, and 5 incubi.
Posted by Bryce963 at 4:22 PM