This evening Jack and I played a 1000 point game, Codex Marines v. Dark Eldar.
For preliminary matters, we rolled Capture and Control (3 objectives) with Night Fight, I rolled +1 WS on my drugs. I rolled and got to choose, I chose to go second in Dawn of War.

Note: The big white cubes are objectives, and the white paper squares are Razorbacks. Also each photo is from the end of the turn. 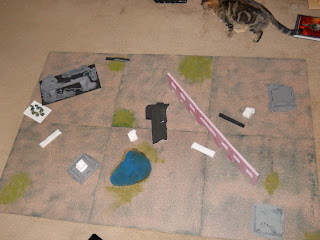 Here Jack put down one tac squad in razorback, and his Master of the Forge on a bike with a conversion beamer. I deployed nothing and reserved both wrack units and the warrior unit. 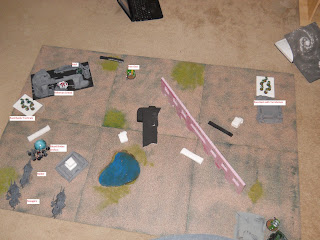 Marines 1 :
M Jack brought on his second razorback, his iron clad dread, his rifleman dread, and his drop dread.
S Nothing to shoot at, so things ran if able.

Dark Eldar 1:
M I brought the two ravagers and the raider on, archon and bloodbrides disembarked and dropped Webway Portal.
S Raider hits and fails to pen the razorback. Left ravager stuns the razorback, and right ravager shakes the rifleman. 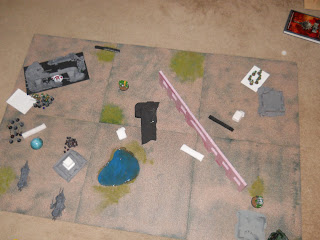 Marines 2:
M Ironclad and drop dreads move closer to the action, Master of the Forge moves for a better firing angle.

S  A hunter killer missile from the ironclad destroys the left ravager on a 6. MoF deviates off of the bloodbrides, and the rifleman hits the right ravager twice to but fails to penetrate.


Dark Eldar 2:
M A unit of wracks comes in from reserve and moves up. The bloodbrides and archon move towards the marines.

S The raider stuns the razorback, the ravager then wrecks it, dumping the marines out in front of the hungry wracks. The wracks manage to catch 5 marines with a liquifier gun with an ap of 5, and two more with a template with ap 3, three wounds were caused and then saved, none from the ap 3, though one wrack was killed by his squads template. The bloodbrides run 3 inches.

A The wracks assault the tactical squad, dragging down one marine, only to have on of their own pulped by a powerfist. Feel No Pain s great until you don't have it. 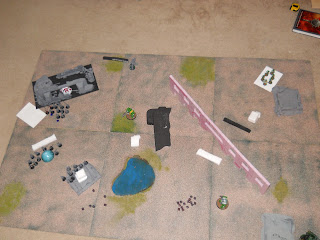 Marine 3:
M Drop dread and Ironclad move towards the action, MoF hightails it out of charge range.

S The drop dread runs 6 inches, HK from the ironclad blows up the other ravager. MoF fires at the bloodbrides again, deviating and only killing 1. The rifleman fires at the raider, hitting 3 times, 1 is saved by the flicker field, the raider is destroyed.

A Wracks do 6 wounds, killing 3, the powerfist sarge smashes 1 wrack, the marines make their morale check.


Dark Eldar 3:
M Second unit of wracks and warriors come on. Wracks move up, the warriors hide behind the WWP, I think you can do that. Bloodbrides lose 2 to the dangerous terrain of the razorback wreck.

A Arhcon and bloodbrides charge, archon handily dispatches the last two marines and gives the bloodbrides their first pain token. Bloodbrides and wracks consolidate into the ruins.
Posted by Bryce963 at 10:20 PM