I'm still looking for work, but now I'm getting some games in and doing some modeling.

I've played 3 games of 6th with 2 different armies, I have started to form an opinion.

I like it. A lot, it's different, it's zany at times, but its solid and fun. Warlord traits have yet to mean much to me, I've not rolled any that have been helpful, or that I can remember. I've not played with vehicles much, but I have played against them, and glancing things to death can be too easy. This edition might be a bit too much of a back lash at all the vehicle and especially transport heavy armies of 5th. It feels like GW has swung too far the other way. Especially with the FAQ changes to transports that make them even more detrimental to the unit inside.

With the changes to wound allocation since Friday, a lot of what I'll be talking about in these brief reports will be outdated. But I will try to address that.

I won a 40k tournament! Against two other guys not long after 6th came out. But I still won. 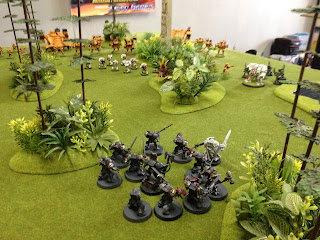 Here we see the enemies of the Grey Knights arrayed before them. Awaiting their doom.
With the previous wound allocation rules I was able to just throw wounds I didn't want off of Draigo and onto my chosen bitch for the game, you see him there holding the daemon head. That one guy took a lot of fire and kept at it. I took railgun shots on Draigo because he just doesn't give a fuck, now he would no longer get the Feel No Pain rolls that happened way more often than they should have.

In this game and well all games with my Paladin army, I slowly marched up the board and shot the ever loving crap out of one thing a turn. After taking out the dread with Draigo, and then the marines there to the left I had most of a Tau army to contend with still. This is where I first got my taste of 6th Edition flanking. It's so cool that it matters where you are shooting and where you are shooting from now. His suits started picking off my guys on the side and I couldn't Look Out Sir(pre FAQ Paladins were characters) off of my psycannon guys and he took one of them down along with a couple extremely capable bullet catchers.

This was a kill point mission and I only had 5 total after combat squading my second 10 man Paladin squad. He did kill Draigo because I was dumb and sent him off after a Crisis Suit squad alone. But I still managed a double digit kill point lead. 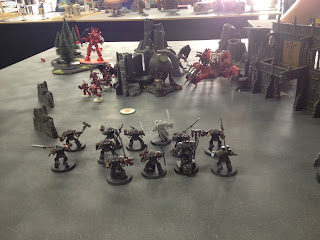 Here our intrepid heroes face down a horde of berzerkers, daemon princes, defliers, and Skarbrand. This was an objective game with 3, he won the roll to place two, both in his side of the board, I put my one right in the middle.  He also had a large squad of blood letters in reserve.

Again our boys just marched forward and started firing. Taking out most of the berzerker squad turn one. Then his turn one the deflier charged first and got overwatched to death( I had the power that let me overwatch at full BS),  itwas glanced and pinned to nothingness before he could even say Blood f...! The remaining berzerkers then charged unmolested. They challenged and Draigo met the foul unit champion for single combat, we forgot about the re-rolls from the unit. 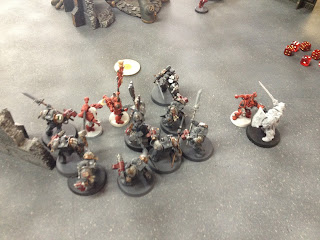 The Initiative 6 halberds getting to move in on their round stopped the charge in it's tracks, Draigo then handily defeated the berzerker champion.

After this on my turn we made our first rules mistake, I thought that the divination power let you use full BS when snap firing, it is only on over watch, so I shouldn't have been able to kill that swooping daemon prince so easily. Lesson learned. My other Paladin squad came in from reserve and one teleported in response to the blood letters that had materialized in my backfield and the other had a mishap while going after the defiler guarding the back objective. So my opponent placed them in the farthest corner from him that he could.

The game ended up with me shooting the crap out of the other defiler( the mission was the one where Heavy Support also scored), and my 5 man squad fighting off the blood letters handily. Also, Draigo broke off to challenge Skarbrand and the Chaos Lord alone.

Between the blood thirster and blood letters this was the first time by Grey Knights had used their anti Daemon rules, it was pretty ridiculous. Skarbrand failed his leadership test and was banished back to the warp after suffering only one wound and the Chaos Lord stood little chance at getting through Draigo's 3++ and 2+. But they did put some wounds on him. 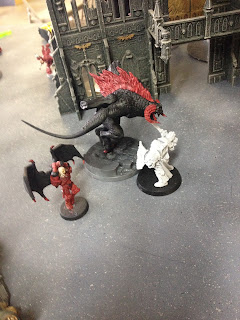 Draigo then went after the other berzerker squad holding the objective in the building seen in the back ground. We called it after this fight. It was another victory.

So my first ever tournament first place, out of 3 guys. But we all won something and none of us had to chip in for the tournament cost. It was also a cracking good time.

I'll try to get another post up for next week about my first Escalation League game at Stormcrow Games, it was my first run with Dark Eldar in 6th and was the closest game I have ever played, and won.

In the mean time, I am leaving for Europe for vacation next week and will be in London next weekend, the 15-17th. If any of you UK readers want to get together and talk 40k over a couple pints let me know on twitter @bryce963. I'm wanting to do an interview with a UK gamer on the actual and perceived differences of the hobby in it's birth place and amongst us Colonials.
Posted by Bryce963 at 12:22 PM