Last night down at Ye Olde Game Shoppe (Stormcrow) I played and watched some Dust Tactics from Fantasy Flight. This is basically a wargame/ board game hybrid. It's a nice way to do it. The game is played on "terrain" of 2x2 squares of different tiles and features.

The mechanics are actually very simple and easy to use, and a lot of fun. Every unit has a card with all their stats except for a pretty diverse and fun set of universal special rules and special weapons. Such special rules include artillery weapons, and rules for units and characters like "Bad Ass" and "Black Ops".

The newly revised rules can be found free online HERE.

Besides having movement speed, armor, and health on the card, each unit has a weapons block. Each weapon has a range in squares, from 1 being adjacent, to U being unlimited. Each weapon compares unit type and armor, to give a certain number of dice to roll and a certain amount of damage per hit.

Here is an example, these are US armored jump troops. How cool is that? They have a Dual Victory MG as a weapon, it has a range of 4, and can mow down normal infantry. Going to that weapon, go over to the 2 under the infantry section, this is the average toughness for foot soldiers. Each model rolls 5 dice and scores one damage for each hit. Brutal. But they really can't do much to a tank at range. This is where the Rocket Punch comes in. It only rolls 1 die for each model, and only scores 1 damage per hit, but it can hurt even the hardest armor in the game. The MGs are also good against aircraft( these have no been introduced yet, it's just a tease). Also the "Jump" rule allows them to jump over cover and  buildings.

The core mechanic is rolling a number of special hit dice, essentially the game is played looking for a hit symbol (5+ on a d6), though some units like snipers reverse this and look for blank dice ( a 2+ on d6). A hit symbol does a listed amount of damage, each damage takes out a model in a unit, or a hit box on a vehicle or character.
Like I said pretty easy to use.

Each turn starts off with players rolling 3 dice for initiative, or 4 if you have a character with "Black Ops". The winner choosing who goes first. Players then alternate activating units until all units have be activated. A unit can perform 2 actions on it's turn, move, shoot, and use a skill. They can take any action twice except attack, however a unit can "Sustain Fire" by using both actions to shoot, this allows the unit re-roll any non hits that they get.

Here is the start of the demo game I played, I was the US, he played zee Germans. 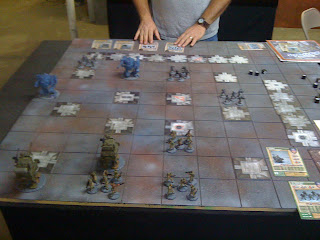 I started off well, killing his walker on the far left with 1 shot from my napalm tank, on my far left. The napalm is short range, 2, and gets 1 die against tanks up to 4 or 5 armor, and if you roll a hit, they die. But this was basically the highlight of my game and he stomped me thoroughly. It was a lot of fun. 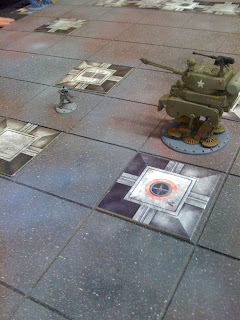 Here is a picture from the first game I watched, basically I was able to pick most of up from watching that one game.
Posted by Bryce963 at 12:04 PM