New Beginnings
Alright, yesterday was the Ard Boys prelims here in the US. It was also the opening day for the newest and only wargames place in Lubbock Texas, Stormcrow Games.  Aaron, a local gamer, has opened the shop, and I wish him the best of luck and success. I even bought something yesterday. 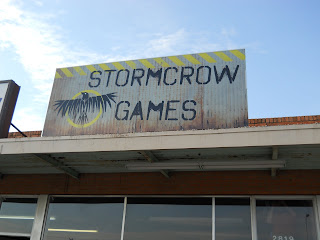 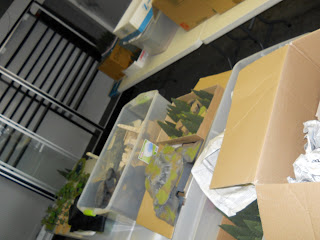 They had 6 tables set up with varying terrain set up, though only 5 ended up getting used as we had 10 players show up. 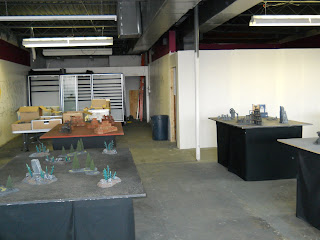 
Now onto the reports, I'm going to cover the first game today and the second and third tomorrow along with thoughts and comments.

My first and third games were against a really great kid named Skylar, he was a little wargammer Bro, and a lot of fun to play.
The first mission was kill points and involved a traitor model that we needed to kill, the missions can be found HERE in my last post. 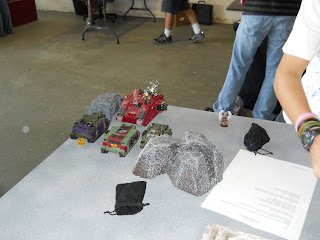 First turn he castled up in the corner, and used his crazy Blood Angels speed to come forward, I did immobilize one of the vindicators, trapping the land raider in the back field for most of the game.

Turn 2
I got first blood, taking out a rhino, but he went full bore at my long fangs and killed 5 over the three squads.

Turn 3
There was much slaughter, he killed 2 of the three thunder wolves in one squad with vindicators, and wrecked a rhino into being in the way. He also assaulted my three long fangs squads all over the board, taking all three down in one turn. Tempests Wrath kept Astorath and his jump troops bottled up with the land raider in the back field.
But, my revenge was sweet, the final Thunderwolf with a power fist charges and gets into contact with both vindicators, which couldn't move and destroys both of them. The scouts come in from the back and with two meltaguns blow up the land raider. We are back at 4-4 on kill points. The Thunderwolf Lord killed a devastator squad that I think we forgot about when totally kill points. 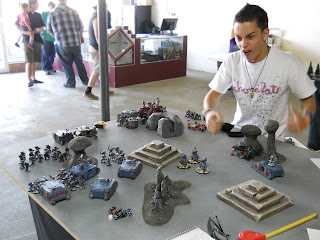 Turn 4
With the raider gone and lots of thunder wolves getting close to his guys he moves the assault marines around  to take out the super thunderwolf that just punched two of the best thunderwolf killing tanks to death at the same time. Due to Tempests wrath the sanguinary priest dies! The lone thunderwolf finally dies after taking 10 wounds, and only fails 2, but that is enough.
In my turn 4 the lord and the three other thunderwolves assault the assault squad, killing most of them. There are also lots of shenanigans going on with the traitors trying to kill each other and hoping into rhinos and running away from each other, with the blood angels having the speed advantage.

Turn 5
The thunderwolf lord takes down Astorath, then dies to more death company in my turn 4. Those re-rolls all over the place are brutal.

Turn 6
The remaining Thunder Wolves and death company kill each other.

It ends up a minor loss (possibly due to miscounting, but that would be a draw), with almost equal battle points because I went for secondary stuff like a mo fo. I lost by 1 kill point, it was back and forth the whole game, and a great time. I killed the HQ+1, got my traitor into his deployment zone +3 and controlled the most terrain +1. All in all it was a great game, and I wish I had take better notes, it's a shame that Skylar doesn't live here, he was a fun guy to play, and I'm glad he got the win, his second game he got massacred about about hour before time was called.