I've just moved to the southern Houston area. If you know any good game stores, or are in the area and wanted to game or grab a beer, let me know on twitter @bryce963.

But I have recently purchased the new all plastic Flames of War starter box called Open Fire. It's a great deal, you get a ton of miniatures, a mini rule book, some cardboard terrain to get you start, a quick start guide, markers and tokens, and some dice for $70.

You get the core of a German Grenadierkompanie, and some British tanks along with a US Airborne platoon.  We'll see those here in a just a bit, but first I want to discuss my thoughts on Flames of War so far.

I have played two games with myself , as well as watching some of a tournament at Asgard Games. Which is going to be my new gaming home so far. They have a very welcoming atmosphere, gamers who are enthusiastic and want to help people get into the hobby, and involved management. Basically, what else do you want?

All jokes aside playing with yourself is a great way to figure out a new game. It let's you try out things and figure out the rules at your own pace. So I'll have some idea what I'm doing when I get someone to do a learning game with me.

I just moved in Friday, and the fiance and cat are back in Lubbock, so I have had a lot of time on my hands to build and play. Sadly my paint is all packed up or I would have a lot of this cranked out by now.


Here we see a struggle between the German defenders and Allied attackers trying to take a village square. 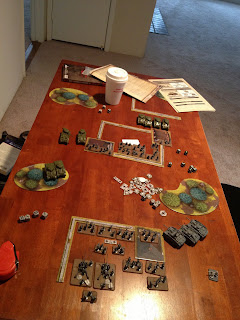 I've played two different times and the Germans have just trounced the Brits and Americans. The Airborne platoon holds it's own, but the Pak40 anti tank guns just make a mockery of the Shermans when they can get a shot at them, and for the Shermans to try to knock them out they have to be in sight too. Also, the German platoons seem more than a match for even the most determined, skilled, and well equipped US infantry there is when there are twice as many of them.

So most of the challenge is to keep the Shermans alive so they can keep firing.
Alright enough of my ramblings, here's more model pictures. These new plastics put the metals to shame.

First we have the Germans: 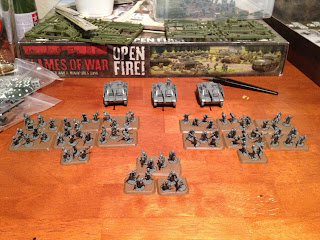 Here we have a Company command team with a Panzerschrek team. Two platoons of 6 teams of Rifle/MG infantry with a platoon commander. In the back are three StuG assault guns. Not picture are the two PaK40 anti tank guns, those things go through Shermans like butter.

Finally we have the Special Relationship, a British tank company, and a US parachute infantry platoon. 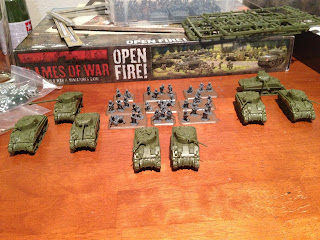 We have a Brit Sherman V company command team, along with two platoons of Sherman Vs with a Sherman Firefly VC each. The Firefly mounts a large anti tank gun onto the Sherman body. Backing them up is a US Airborne platoon, with 6 Rifle/MG teams, as well as a mortar and a bazooka team.