Yesterday we talked about models, today we talk about the rules.

The fun part of all these handfuls of of dice is that except in a very few instances they explode on a 6, which counts as two hits and can be re-rolled. Allowing even the most puny frigate to get a lucky punch and sink a battleship. This is also consistent throughout all types of attacks, cannons, torpedoes, rockets, tesla coils and friggin lasers. Except to hit the tiny flyer tokens(various types of normal sized airplanes), those dice do not explode, though on a 6 one of the tiny flyer tokens is destroyed

Here is an example of a stat card to better illustrate these delightfully simple mechanics above.

Here you can see the attack and defense stats I just talked about.
You have a weapon grid that shows the number of dice that are rolled at certain "range bands" each of 8 inches. So range band one is from the ship to 8 inches, range band 2 is from 8 to 16 inches and so on. With the maximum of 32 inch range these little ships can hit a rather large territory. However most weapons roll more dice the closer they are, but some get more effective the farther you are away like the rockets the Americans and Japanese are fond of.

Also on this card you have the movement, Assault Points(AP), Anti Air (AA), Concussion Charges( CC), and Ram Rating(RR) of the ship. Assault Points are used to board other ships with rocket marines. Yes all infantry in the game (though they are much too small to see at the 1/1200 scale) have jet packs! These troops are resisted with the AA rating of the ship being attacked, with hits negating hits from the marines. Damage is then done to the AP score of the ship being attacked. If reduced to 0 the attacker captures the ship as a prize.

AA is also used against rockets and airplane attacks that are close enough. CC is used against torpedoes and submarines.
The back of the stat card lists the Model Assigned Rules, special rules that make the models more than just moving handfuls of dice to throw. The type and class of the model and what percentage of your force can be that type. As well as the firing arcs for all weapons and the number of models in a squadron.


Here are examples of the different firing arcs for different types of weapons. 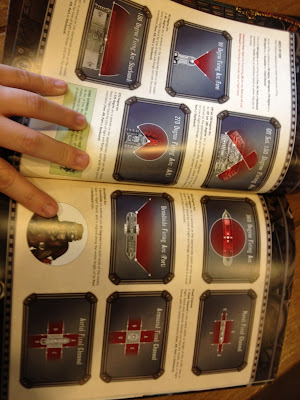 Copyright Spartan Games.
The firing arcs look like a lot of where the game is played, your movement sets up the shots, you make turns and move so your guns can do their job. You can have a huge broadside and rockets and tesla coils, but none of it matters unless the enemy is in the firing arc for those guns.
Rockets, tesla coils, and torpedos typically are in fixed arcs. So that means straight out from that facing of the model, it is the width of the model or base for land models. Turrets have more flexibility with targeting, but their firepower can be reduced as you take damage, whereas rockets and torpedoes aren't.
Now for a little more on the combat mechanics now that we've talked about the exploding dice and firing arcs. Guns are also divided into Primary and Secondary weapons, this affects the roll to hit or
The normal dice roll for an ordnance attack (guns, rockets, torpedoes etc.) hits on a 4, 5, or 6. A red six is rather cleverly used in the rules to denote that this type of roll explodes, if the to hit number does not include a 6, then the dice roll does not explode on a 6.
There are certain situations that can affect the number needed to score a hit, such as various MAR's that add or subtract from a roll. Other ships and terrain can block or obscure line of sight, this reduces the number of attack dice that a ship uses.
Alright everyone, that is it for now, there is a lot to this game, but it seems like it all meshes quite well.
Posted by Bryce963 at 10:14 PM