Sorry no princesses, just Ogres with magic. That's what I am going to talk about today, my own amateur take on the lores of magic usable by the Ogres. Gut, Fire, Heavens, Beasts and Death. I currently have a butcher model, and a firebelly model, so I am going to need to make the other three. 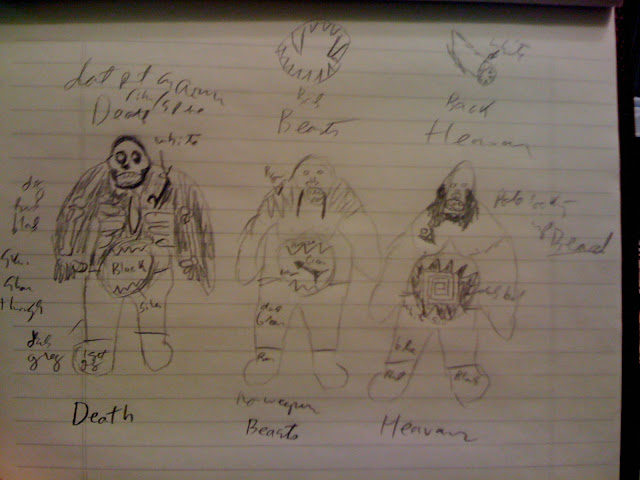 Here are some not quite as bad as I thought sketches of my plans to make Ogres in the other three lores of magic available to the army.  I plan on just converting normal ogres to be these casters, those that follow the Great Maw trust enough to not wear a gutplate, but those who follow other ogre religious philosophies are not so trusting in such a capricious deity. Also less green stuffing.

First the Death butcher,  he will be getting a nice normal skin dry brush, then have all the rest of his skin dry brushed black. Then I plan on drawing nice white bones on him, like a voodoo priest or a halloween costume. A  white skull on his face and ribs, a spine, arm and finger bones to make him look fierce. I might even tattoo the death magic symbol on him in purple or white.

On to the lore-
Spirit Leech- With low Ld the signature spell seems a bit chancy to be effective, but taking out other mages and maybe a standard bearer to help with fear would be nice. Also 12in isn't that far, but that may be the 40k player in me.

The lore attribute here is basically the only way Ogres can get more Power dice as far as I can see.

Aspect of the Dreadknight- We already cause fear, and making enemies run away sounds cool for the boosted version, I'm not too impressed  though. But maybe I don't understand the whole terror/ psychology/ panic stuff enough yet.

Caress of Laniph- Now we're talkin', this will take out wizards and generals and all sorts of things, if you get close enough, yeah 12in for the base version is a bit short, but it allow for more dice too.

Soulblight- Ok, this is cool basically I would need 2s to wound you and you will need 6s to wound me. The boosted version is even cooler. This would be nice on other tough things, like chaos warriors etc.
Doom and Darkness- This would make fear pretty hardcore at -3 Ld, and even the boosted one isn't too high of a casting value.

Fate of Bjuna- More short range character(or monster I guess too) sniping, this one is pretty hardcore, if you can cast it, while in range, and they don't dispel it, you can probably take out most characters, especially if they don't have a ward save. Or that damned reverse ward save Dark Elves get, that thing sucks!

The Beast butcher, I can't really think of many parts to put on him, and my sculpting might not be up to making a shaggy pelt for him. But I might try. I think I will actually use one of the normally stupid looking bear traps on him, a beast holding a bear trap that works. I want to use as little metal on him as I can, mostly just the gut plate.

Wyssan's Wildform- This is why you're taking the 100 point dude, throw him in a horde with characters and holy crap. Normal Ogres are S and T 5, a Tyrant is 6. That's dragon tough! And it can't be dispelled once you cast it.

Flock of doom, the gut magic version is better.

Impenetrable Pelt- So a T 8 tyrant, also another awesome one taking him in a horde with a tyrant and BSB, they are all super hardy, but that requires him to be lvl 2, and need to cast a pretty high number.

Amber Spear- this is pretty cool, it penetrates ranks, does d3 wounds and doesn't allow saves. A good knight killer if you could hit them on the side, it casts easier on them too. The boosted one is S10, and d6 wounds.

Curse of Anraheir- a pretty cool debuff with long range. Would be nice if there was a lot of terrain. I need to learn the terrain rules.

Savage Beast- Oh my gods  put this on a tyrant or even a bruiser, or hell a unit champion or the butcher himself. Wow. +3 attacks and +3 strength, the attacks more so, the strength will just be icing, you can molly whop a dragon to death.

Transformation of Kadon- This sounds pretty badass, don't know how good it would be. But sounds awesome.

Finally Heavens, this guy is going to have a beard and be looking up at the sky. A dark blue gut plate with a white spiral drawn like it is above. He'll have the heavens symbol on him, and if I can get one of those sextants from an empire wizard kit it will be awesome.

OK, the lore attribute is kind of crap, but could be good against an eagle or something.

Iceshard blizzard- This is pretty cool, with shooting being usually on 5s and 6s anyway, this helps a lot. Also, screw cannons and templates half the time. Negating something that hits 4 or 5 ogres at a time with a 4+, that;s cool.

Harmonic Convergence,- Oh hell yes. Wolf standards for everybody within 24in?!?!? Oh what's up mornfangs, you have a 2+ armor save? If only there was a way I could choose my spells.

Wind Blast- this would be cool if you could have it on multiple wizards. Kinda meh otherwise, but could move someone out of charge range.

Curse of midnight wind- re-roll all 6s, to hit wound and armor saves? Screw all of the other guys stuff on a 20+. With ogres needing 5s and 6s to be wounded by normal troops, and enemy saves being reduced by ogre strength, this is pretty awesome. also 24in!

Urranons thunderbolt- d6, S6 hits 24in range, and 48!( like a missile launcher) for only 3 more on the casting roll? Sign me up.

Comet of Cassandora- This is so fluffy for Ogres to use. Also, random, cool and possibly devastating. Mostly random.

Chain Lightning- this just sounds fun, helpful against lots of small units, or if cast on a horde it will be within 6in of a lot of the other sides units.

Over all I think these lores would be fun and interesting, I can't wait to get more money or trade for some Ogres so I can make those other mages. Now I just need more points!